RUSH: Frank Siller, Tunnel to Towers, was back on Fox today, folks, to announce even more great works they have been able to accomplish because of the money raised at the RushLimbaugh.com store and the Stand Up for Betsy Ross campaign. 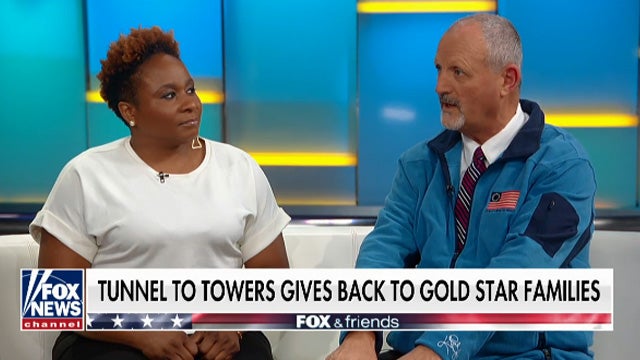 This was Fox & Friends today. And Frank Siller, the CEO of Tunnel to Towers had a guest with him, Gold Star widow Mecca Nelson. In fact, put the still picture up there, Brian. We’ve got a still shot from TV. Frank's wearing a different fleece today from the RushLimbaugh.com store. Stand Up for Betsy Ross, isn't that a gorgeous blue fleece?

By the way, if you don't have the Dittocam, we have the entire video of Frank's appearance in the ticker at RushLimbaugh.com. So you can watch the whole thing. But if you're watching the show on the Dittocam, that is Mecca Nelson who is a Gold Star widow who was one of the families benefiting from the great work of the Tunnel to Towers Foundation. She was on the set today with Frank. And here is a portion of his appearance today with Steve Doocy and Brian Kilmeade.

SILLER: We're very grateful to Rush and Kathryn Limbaugh. Without their donations and their listeners to Rush's show, we'd not been able to do these homes. They donated over $4 million –

SILLER: Unbelievable, right? For the Stand Up for Betsy Ross T-shirt. You know, I was watching The Patriot last night and there's a scene when he's coming over a hill on a horse and he’s going with the American flag, they're attacking Cornwallis, the British, it's the Betsy Ross flag that he's coming over with and it just stands so much for our Revolutionary War.

KILMEADE: And they sell apparel, including this fleece, right?

SILLER: He's got a whole new line going out for Christmas. He wants to raise more and more money for us. And we can't do it, once again, without their money, we would not have been able to deliver these three mortgage-free homes this year to these great heroes. 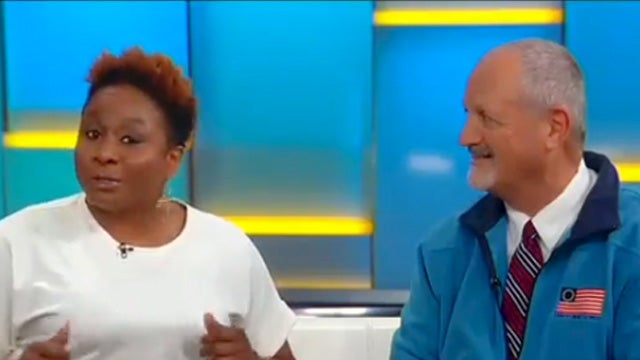 RUSH: They're up to 14 or 15 I think. This is three just in the recent past. And throw the picture back up again because that's Frank Siller on the right with Mecca Nelson. She was the recipient. She's the Gold Star widow, her husband killed in action. And Tunnel to Towers was able to pay off her mortgage.

And, folks, it's not Kathryn and me. It is you. We've been able to donate $4 million and counting to Tunnel to Towers on the basis of your purchases of Stand Up for Betsy Ross merchandise at RushLimbaugh.com at the Store tab there, our EIB Store. And Frank was right. We have increased, we have added to the apparel line. We've got an apparel line strictly for women, different styles, different sizes. We've added fall and winter apparel now, and Frank modeled two different fleeces yesterday and today. This blue one that he has on, it's just gorgeous. There are hoodies. Long sleeve T-shirts, V-neck T-shirts, there's any number of things.

There's also stuff in the store that's not logoed with Stand Up for Betsy Ross. There are gift packages featuring items autographed personally by me. We got it really well stocked for the holiday season. But all the Stand Up for Betsy Ross merchandise, the proceeds go to Tunnel to Towers. Here's the next short bite, Steve Doocy picking it up.

DOOCY: You can go to RushLimbaugh-dot-com, take a look at this.

DOOCY: It’s not just the Stand Up for Betsy Ross t-shirt. Now it’s a whole line of fleece and stuff.

NELSON: I’m waiting for mine.

SILLER: Men’s and women’s and you got it, T-shirts, long sleeves.

DOOCY: (points to Siller’s cuff) Is that Rush’s signature right there?

NELSON: On the sleeve. 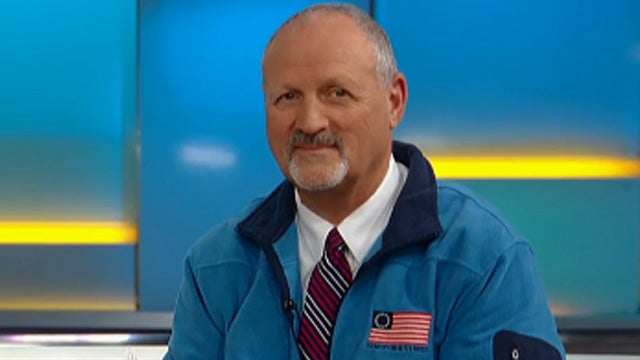 SILLER: Right there. It is. He’s been remarkable, him and Kathryn.

RUSH: Well, it's actually you, folks. Now, stop and think of this, just to remind everybody. This all started on July 4th when Colin Kaepernick told Nike that he didn't like the new line of tennis shoes they were going to sell with the Betsy Ross flag on the heel. So Nike shelved 'em. So Nike said, okay, Colin doesn't like 'em. We won't sell 'em.

By the way, I need to remind you. There are more knockoffs and counterfeiters out there than ever, and they're overcharging people, and they're faking the merchandise, they are faking the logo, and they're not sending any money to Tunnel to Towers. There's only one place to get the real Stand Up for Betsy Ross merchandise, and that's at RushLimbaugh.com, the EIB Store. And it's easy to find. Just go to RushLimbaugh.com, the website, or on your app, find the store, the Store tab, and tap or click on it and you'll be amazed at the line of merchandise that's available there. And it's been stocked up for the season.

One more thing. Through this week, purchases of $50 or more, free shipping and a free Tervis tumbler, EIB Network Tervis tumbler thrown in. Frank is looking good in this merchandise, by the way, and congratulations to Mecca Nelson for being one of the beneficiaries of the great work they're doing.

RUSH: We have a little saying, a little slogan here at RushLimbaugh.com in the store, "Go big or go home." That's the attitude each and every day. And, by the way, Mecca Nelson, it was funny, when you watched the video, she loved the fleece that Frank was wearing. She said she was gonna have to go get one.

Everybody that sees this stuff is blown away by it because we're not gouging anyone. We got a price point that we wanted to be fair with, and we have found the finest quality merchandise we can at scale for that price point. So, I mean, it's really an honor to be part of this. And it just scaled up dramatically. It's not the result of anything other than popular demand. It's been a tremendous thing to be part of.